Tool to manage Access to Areas with Residential Priority. It allows the sanctioning of vehicles circulating within the defined area without the relevant authorization. 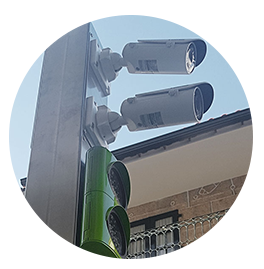 ACTAIS® Traffic is the product designed by Ecocomputer for the access management to Areas with Residential Priority. In essence it is the system ACTAIS® Access Control already implemented in Hunosa in 2009 but adapted in its interface to the needs of making a proposal for sanction, among others.

The ACTAIS® Traffic system allows the sanctioning of vehicles circulating within the defined area without the relevant authorization. Loading and unloading vehicles will be able to access the selected streets in the predetermined daily time zone.

The action is based on the installation of a control system through license plate recognition cameras, so that a sanctioning file is automatically proposed in the Local Police when an unauthorized vehicle accesses the specified streets that constitute access to the Priority Area Residential, and in the implementation of traffic lights that inform according to the time whether or not the circulation of vehicle is allowed.

The access control of each node is based on the installation of two video cameras, one of context and another for recognition, that allow to identify the vehicles that access the pedestrian zones and send their license plates to the control unit to Processing. From each event, several photographs of the vehicle and its registration are stored as well as a video sequence of the access.